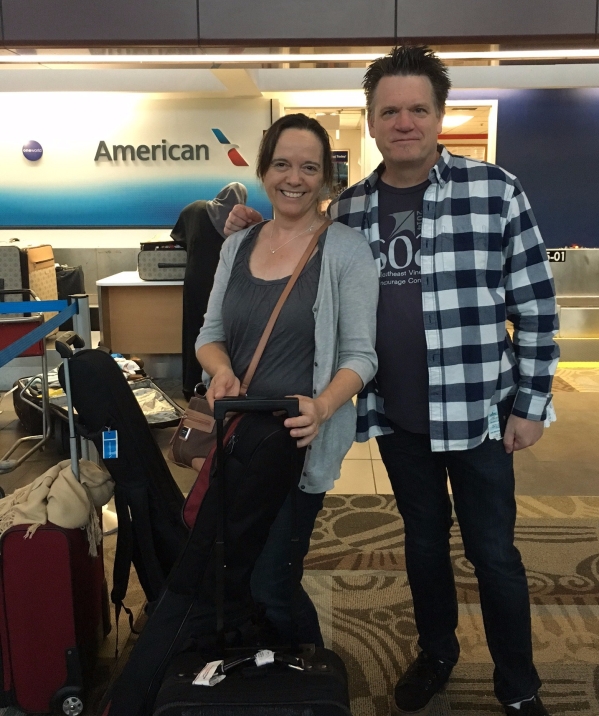 Thanks to the generosity of our own church and the two churches from the Argentina Partnership (Vineyard), this past May we were able to go on a scouting trip to see what Mendoza was like and get a feel for the place. I had never been there before, and Karina had been there once as a little girl. We flew out on May 22  and after an overnight flight we landed in Santiago, Chile at 6:00 in the morning. We had set up an 8:00 clock meeting with Roger Cunningham, who pastors the largest Vineyard church there, as well as being one of the founding pastors of the movement in Chile.  We spent a couple of hours chatting with him and he was very encouraging, promising his support and praying a blessing over us. We felt very encouraged by this and by him taking the time to meet with us.

We then flew over the Andes mountains to Mendoza, which is less than an hour flight. When our feet were finally on the ground we prayed a prayer claiming the city for Jesus and his kingdom. (It was a very powerful moment.) We were met at the airport by Debbie Miller, whose husband co-pastors a large Evangelical church in Mendoza. They are friends of the parents of a family at our church. When we met her through Facebook, she insisted we stay with them, even though they didn’t even know us personally!

They were great hosts and were able to explain to us a lot of the basics of living there, plus she drove us around the first day to help us get familiar with the city.

We were there for most of 4 days, and were able to meet some key people and get to know some of the neighborhoods that we might want to live in. Mendoza itself is small, about 250 thousand people and you can drive from one and of the city to the other in about 20 minutes. It has the feel of a big city but it’s not crowded at all. It is very beautiful with tree lined streets and lots of plazas. Even the airport was tiny, but clean and modern.

This trip was such a confirmation and we now are very much confident we are doing the right thing. We felt right at home and completely love the city.

Mark and Karina Young moved to Mendoza from the USA in January of  2018 to plant a Vineyard church.

This blog used to be a chronicle of the preparations leading up to the move. But now that we have been here a year, and we have an actual congregation and regular meetings, it’s time to talk about what God is doing on Mendoza and what he will do. So this is a place where you can keep in touch with the progress of our growing church, Iglesia Viña Mendoza. You can subscribe to our mailing list in the sidebar to get regular updates and prayer requests, or if you would like more information.